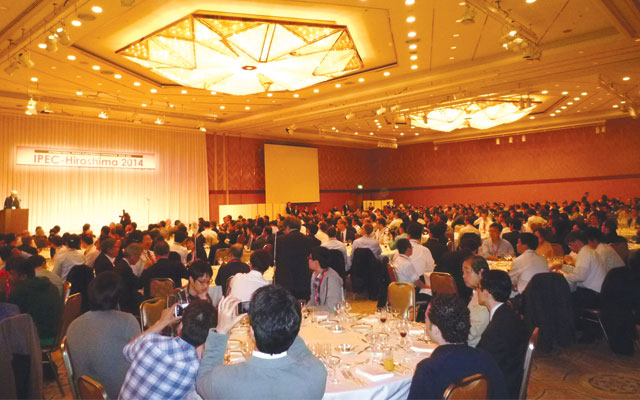 Preparations for the Miyajima International Night that was arranged for delegates attending the International Power Electronics Conference (IPEC) Hiroshima 2014-ECCE Asia underlined the importance of personal contacts when arranging an event in Japan, as well as the need for sensitivity when the venue is revered as a national treasure. The evening event was staged on Miyajima, an island in Hiroshima Bay. Traditionally considered a holy island, Miyajima has also been recognised by UNESCO as a World Heritage Site. And as no-one had ever attempted an event of such scale and purpose on the island, some concerns emerged, admitted Noriko Shimooka, spokesperson of the Hiroshima Convention and Visitors Bureau.

“We were aware that nothing like this had been tried before so we started our preparations two years before the convention,” Shimooka told TTGassociations.

“But we were very fortunate,” she added. “One of the professors on the organising committee for the IPEC was originally from Hiroshima and he had a friend who lived on the island.”

That contact arranged introductions to the local association of merchants and shop owners, as well as with the head of the shrine that is considered the jewel in the crown of the island.

As well as being recognised by UNESCO, Itsukushima Shrine is officially listed as one of Japan’s three most beautiful spots. Dating back to 811, the shrine is built on stilts over a narrow inlet, giving it the impression of floating above the water. It is also famous for a huge crimson torii gateway a little further offshore.

The local business owners expressed a degree of concern at a large influx of overseas delegates to the limited number of restaurants on the island, but were eventually convinced that everything would run smoothly, Shimooka said. Signs had to be prepared for the restaurants that agreed to participate while seats needed to be found for the 400-plus delegates.

The organisers were also acutely aware that it would be diplomatic to pay their respects at the Itsukushima Shrine, with the head of the organising committee visiting the chief priest of the shrine and offering a prayer.

“I think it went well because we began making preparations well in advance and there was such close cooperation between our organisation, the national tourism association, the local merchants and ICS Convention Design, the company behind the event,” Shimooka remarked.

The outcome – welcoming delegates with omotenashi, the act of entertaining guests wholeheartedly – was something that the organisers were proud of.

“As the Japanese organising committee, we wanted to express our gratitude (to the attendees),” said Toshihisa Shimizu, a professor at Tokyo Metropolitan University and one of the organisers. “But we also wanted them to see and enjoy the historic areas as well as to feel the Japanese sense of honesty and hospitality. This is what we call omotenashi.”

Delegates attending the Miyajima International Night were encouraged to wear traditional yukata (summer kimonos), ride around the picturesque island in rickshaws and pray at Itsukushima Shrine. They also took part in a tea ceremony, went night shopping in the stores that dot the waterfront village, and ate for free in restaurants serving time-honoured Japanese cuisine.

“We wanted to strengthen our friendships all over the world, through the technical meeting but also through an event with a real local flavour,” added Shimizu.