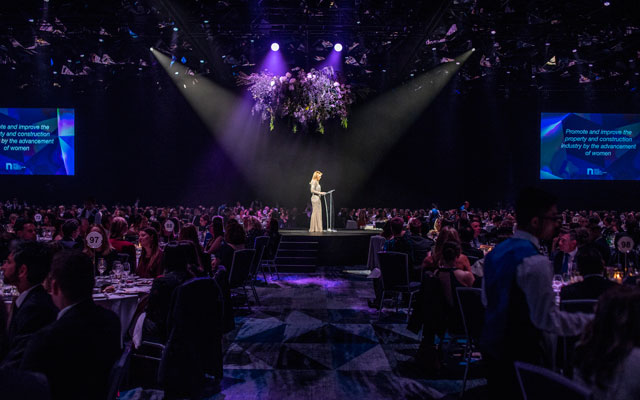 Event brief
The National Association for Women in Construction (NAWIC) Awards for Excellence takes place annually to acknowledge and celebrate female leaders in the construction field. As part of the event, the awards evening raises money to directly support and empower women in the industry. Arinex was tasked to get to the heart of the award’s objectives and raise the bar on what was already a successful previous year, which was also organised by Arinex.

Challenges
For Arinex, working with a long-standing client to plan a captivating awards function with seamless delivery required strong communication to ensure all objectives were met, as well as new ideas to turn the client’s ideas into creative concepts that support the awards’ overall mission and to leave a lasting impression on attendees.

Going into their seventh year and following a very successful 2017 event, Arinex’s Social Programs and Corporate Events team had unwittingly set themselves a high bar. The previous year’s awards had reached the highest ever guest numbers with about 900 participants, featured prominent Australian journalist Lee Lin Chin as emcee and achieved record fundraising.

Solutions
The event was moved to the International Convention Centre Sydney, a new and larger venue to allow more guests to experience the Awards for Excellence.

“Not only does ICC Sydney cater for larger guest numbers, but having a brand new venue enabled us to continue surprising and delighting the guests.” A new theme was also created to give the event a distinctive flavour, which was revealed as Reflection, to mirror innovation in digital solutions including creative design and the latest audio-visual elements.

For entertainment, Arinex kept the celebrity names coming, including a surprise performance by X-Factor winner and Eurovision finalist Dami Im before dancing the night away to live party band Dirty Cash. TV journalist Jessica Rowe was emcee for the night.

To create a more intimate atmosphere for such a large group and space, a 360-degree stage was also set up.

“The ICC Sydney ballroom doesn’t have a built-in stage,” said Tonge-Ferris. “So we needed to come up with a solution to give the high calibre of talent the platform they deserved. We came up with the idea to custom-build a central stage to capture the high energy and keep guests engaged throughout the night.”

As a result, the 2018 Awards welcomed the largest ever audience of over 1,100 guests. Fundraising similarly increased 44 per cent on the previous year from the auction and raffle, which will directly impact NAWIC’s mission to empower women in the industry through investment into an International Women’s Day scholarship and other worthy causes.

Key takeaways
A good long-standing relationship between Arinex and NAWIC made it possible to have a deep level of understanding of the organisation’s objectives and resulted in a strong, collaborative relationship. Also, the customised layout allowed more guests to experience a front-row seat and allowed the emcee and entertainment better access to the audience, found Taleah Bird, awards committee chair of NAWIC NSW Awards.