The 10th edition of the International Conference on Materials for Advanced Technologies remains a crowd-puller, despite increasing competition 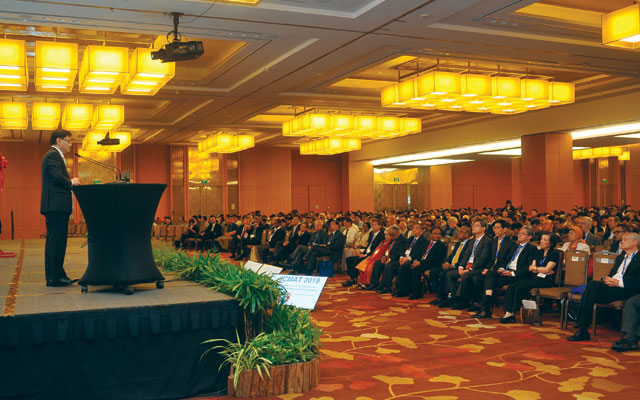 Event brief
Launched in 2001, the biennial International Conference on Materials for Advanced Technologies (ICMAT) is an iconic series in Singapore’s events calendar. The event is organised by the Materials Research Society of Singapore (MRS Singapore), a not-for-profit organisation founded in 1999. ICMAT’s objectives are multifold, but its primary purpose is rallying materials science research and expert members from Singapore and overseas to network, learn from each other and, explore potential collaborations.

ICMAT 2019 was expecting more than 3,000 delegates, including four Nobel laureates, from more than 50 countries.

This year’s ICMAT was opened by Singapore deputy prime minister Heng Swee Keat, displaying the government’s continued support of the event – previous editions were opened by senior ministers of Singapore too.

According to B V R Chowdari, MRS Singapore president and conference chair, organisers utilised as many as 52 meeting rooms for parallel sessions, a single large room to accommodate over 3,000 delegates for the Nobel laureate lectures, as well as a conference banquet and spaces for networking, coffee breaks and mealtimes.

Challenges
ICMAT is a six-day event and its success hinges on the quality of its programming and quantity of attendees. Chowdari said: “With 45 technical symposia, the total number of both national and international symposia chairs was as large as 225 members.”

Managing that sizeable crowd both in real time and e-space was not easy, he admitted.

Other challenges were having to attract the same crowd of similar research interests to the recurring event, as well as keeping the conference truly international, Chowdari said.

He added: “We also had to compete with a large number of conferences being organised by other professional societies and private organisations, and plan how to make the event financially viable in light of rising costs of organising a conference.” Rising hotel rates aside, an upfront financial commitment of S$1 million was also required for this year’s event.

Solutions
The doubling in size of ICMAT over the last decade, alongside an improvement in the quality of speakers, helped in easing the challenge of attracting the same delegates to Singapore again, according to Chowdari.

To keep the conference truly international, each symposia featured Singapore scientists from various local universities and institutes, co-chairing with their overseas counterparts.

Several technical symposia were co-organised with members of other materials research organisations from around the world, thereby increasing international participation.

With conference participants seeking authenticity and quality, as well as the opportunity to network with high-profile researchers, the presence of Nobel laureates at every ICMAT event has become a real drawcard.

Chowdari shared: “We managed to attract a large crowd by keeping the registration fee relatively low and providing significant financial assistance to needy participants through sponsorships from various universities and institutes, where the conference fit into their research interests and there was significant interest among its students and faculty.

“We also kept in mind the need to minimise organisational costs without comprising on our hospitality.”

Key takeaways
According to Chowdari, ensuring a high-quality programme, a sizeable attendance, and the financial sustainability of ICMAT were critical factors in organising a successful event.

He said: “Our continued success in motivating the reputed scientists to be part of the organisation, and attracting the best speakers, encouraged higher participation rates. It was also important to join hands with similar organisations without losing one’s own identity.”