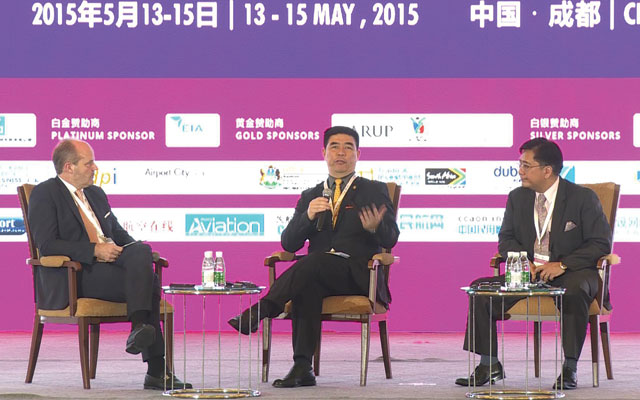 The concept involves the process of establishing a commercial footprint to reduce reliance on aeronautical revenues to benefit the surrounding economic region. Hosted by Sichuan Province Airport Group (SPAG), the Airport Cities Asia Pacific Conference & Exhibition provided a global platform for networking, best practice, innovation, high-level debates and discussion around the creation and development of airport cities throughout the Asia-Pacific region and across the globe.

Previous editions of Airport Cities that have taken place in Asia include Beijing in 2010 and Kuala Lumpur in 2014.

“This, coupled with its thriving economy, where 100 of the world’s top 500 companies have a presence; transport infrastructure, as a hub for south-west China; and the ambition to drive growth supported by aviation made Chengdu an excellent host city for Airport Cities.”

It was timely because SPAG wanted to raise its profile as a destination and highlight its position as a leader in airport development and operation. SPAG was also about to embark on the construction of a new airport and wanted to learn from other successful airport city developments.

Having previously hosted Routes Asia together (another UBM event), UBM and SPAG already had in place an established relationship and positive working experience.

Moreover, there was strong support from key stakeholders such as SPAG and Air China.

Event hosts SPAG secured the venue, arranged the refreshments throughout the conference, provided a welcome desk and support at the airport, free transfers for delegates, visa letters, transport between venues, and provided help in selecting hotels with favourable rates for delegates. SPAG also organised and staged the Opening Ceremony and Gala Dinner and tour. Meanwhile, Air China provided complimentary flights for staff and discounted fares for delegates.

The event was promoted across various channels such as Facebook, LinkedIn, local and international event websites, media partner sites, direct mail, email and telesales. There was also online and print advertising.

Personalised invitations were sent to senior representatives from international airports, while speakers were offered a discount for bringing colleagues.

On resolving the event’s challenges, Milburn said: “ROI letters and personalised invitations were sent to those who stated approval as being a barrier. Personalised offers and discounts were offered and a one-to-one approach was taken.

“We had to forecast local attendance accurately based on conversations with individual delegates, offered discounts for early bookings, and shared information on the attendance of existing delegates and key speakers.”

The success of both Routes Asia and Airport Cities events has further contributed to the selection of Chengdu as the location for the World Routes event that will take place September 24-27, 2016.